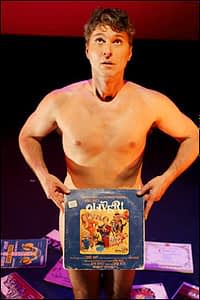 In US, I finally come out as a big musical show queen! US ricochets between my love affair since childhood with Broadway musicals crosscut to an exploration of home, exile and the injustices lesbian and gay couples face in the good ol’ USA.

US is a funny, sassy and pissed-off exploration of these most American contradictions as the piece careens from memories of a ten year old’s plan to flee to Canada to escape the war in Viet Nam (“Man of La Mancha”) , to a meditation on why a Southern California child spoke in an English accent (“Oliver!”), to a surreal tug-of-war at the edge of America as the Niagara Falls rushes between my legs (“Don’t Rain on My Parade”!)

Teetering here on the edge of exile, it has been really fun to do this exploration of how musicals informed my queer identity and politics as we grow up. But then, I was once an eight-year-old boy who did stripteases for his brother with GYPSY on the record player!

When Tim Miller last performed in Portland, in April 2000, his politically charged one-man show "Glory Box" dealt with the issues of same-sex marriage and the struggle for immigration rights for -gay and lesbian couples of different citizenship. Now he's back touching on the same theme and more in another solo piece, "US," only there's a new twist here -- Miller's autobiographical take on life and politics as seen and learned through musicals. Miller, 45, is one of the "NEA Four," a quartet of solo performance artists who successfully sued the federal government about 14 years ago after their grants from the National Endowment for the Arts were overturned under political pressure to eradicate nudity and gay themes from NEA-funded projects. He is co-founder of Performance Space 122 on Manhattan's Lower East Side and Highways Performance Space in Santa Monica, Calif. He has shaped a life around performance art, and with the recent news about civil-marriage rights for same-sex partners, the California native and his subjects are timely indeed. On the phone from his home in Venice, Calif., Miller said "US" began as a piece about Vietnam, and how as a sixth-grader growing up in Whittier, Calif., he remembers saving his money so he could flee to Canada. "I had my little plan about how I would hitchhike up Interstate 5. I had a friend in Portland, it would be a safe house," he says. "Of course, right now Vietnam is on the front page every day both because of Iraq and the contrasting histories of (President) Bush and the presumptive Democratic nominee, John Kerry. Suddenly, performing about Vietnam, especially from a kid's perception, feels incredibly topical." His favorite musical during that time? "Man From La Mancha," about another exodus. Wasn't he young for the draft? "I was planning ahead," he says. Miller says he hadn't planned on tying in life experiences with musicals he loved over the years, it just happened intuitively. "It's a fun topic, how this music theater material deeply influenced me, and not in obvious ways." Growing up gay, he says, he became political. He remembers "Oliver" when he was "a little proto-gay activist," "La Mancha" during his fear of Vietnam, and "1776," which made a big impact on him. "It was exposing the hypocrisy at the start of our nation, which for me as a child was very stimulating. It didn't undercut my sense of myself as an American. It gave me a more authentic way of seeing our contradictions." Theater is still one of the best arenas for politics, Miller says. "It's one of the few places people continue to gather in real time." He hopes that his 70-minute show, in which he'll "take some ideas out for a test drive," will inspire and embolden others. "I think that's one of the theater's major jobs," he says.
THE OREGONIANHolly Johnson

The following performance of US was recorded at Performance Space 122.

Many of my full evening shows are now up at NYU Libraries Hemispheric Institute Digital Video Library (HIDVL) for FREE streaming, including MY QUEER BODY, NAKED BREATH, STRETCH MARKS and GLORY BOX. You can read more about them here.